The Meaning of Prostration 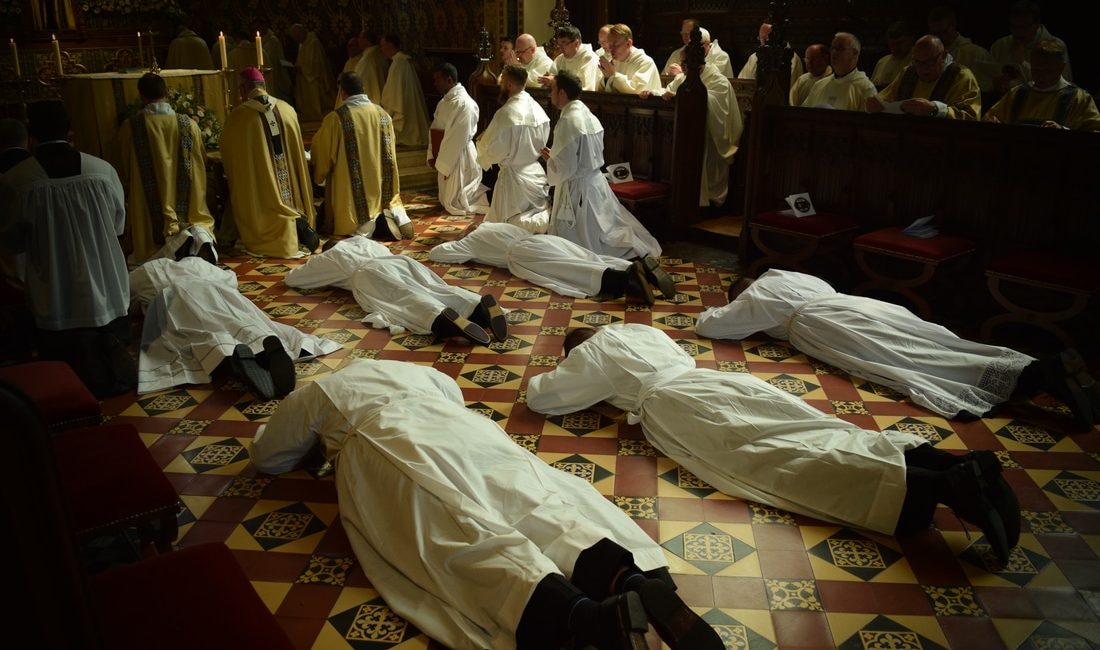 A key part of any ordination ceremony is when the candidates for ordination prostrate themselves flat on the floor, face down. This is a very moving moment for both candidate and congregation. In this blog post, Canon John Udris, Spiritual Director at Oscott, talks about the meaning of this prostration.

‘Like a weaned child on its mother’s breast, even so is my soul.’ Psalm 130

At Ordinations for me one of the most striking moments is seeing those about to be ordained lying prostrate during the Litany of Saints. It captures the humility and helplessness that looks to the prayerful support of our heavenly companions. It beautifully expresses the abandonment of that moment. It’s the body language of trust and surrender.

‘Don’t be afraid or be dismayed’ is what Joshua heard the Lord saying to him when was lying prostrate in prayer after a humiliating defeat. In Hebrew the root of the word ‘dismayed’ can also mean ‘prostrate’. That’s what dismay and fear do. They take the legs from under us. We see that in the Lord’s own Agony in the Garden – we are told that ‘going on a litter further he fell on his face.’ Like Joshua, in that moment he was afflicted by fear and dismay. But this is transformed into trust and abandonment in his prayer, ‘Abba, let it be as you, not I, would have it!’ Then there is the ultimate prostration of the Cross. We see there the prostration whereby the abandonment of Jesus brings about our redemption.

Lying prostrate on her bed in the infirmary in the Carmel at Lisieux, St Therese quoted a line from the Book of Job, ‘Though he should kill me yet will I trust in him.’ She told her sister, ‘This line has fascinated me from my childhood. It has taken a long time to be established in this degree of abandonment. Now I am there; the good God has put me there. He has taken me into his arms and put me there.’ Here she teaches us that trust is not something we summon up in ourselves. It is a grace. At the heart of the psalm for her feast day lies this image of prostration as trust. It is of a child lying prostrate in its mother’s arms:

“Truly I have set my soul in silence and peace
A weaned child on its mother’s breast
even so is my soul.”

Let us ask the Lord to establish us in this degree of abandonment. And lying prostrate in our prayer from time to time may help us to embody this hope