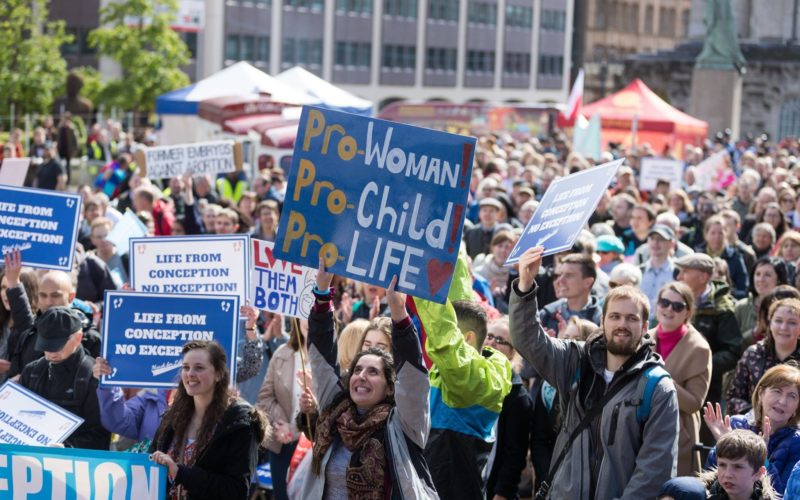 ‘March for Life’ is an annual celebration of the value of the all Human life from the moment of conception until natural death which Oscott College has been proud to support since it started nearly a decade ago. Although the central part of the day is the march itself it is also involves so much more: world-renowned pro-life speakers, a festival atmosphere and a great opportunity for pro-life networking. So far it has been held in Birmingham every year which has made our support for it very simple. However, this year for the first time, because the event has grown each and every year, the event was held in London; the march itself finished outside of Parliament. Unfortunately, it was not possible for all the seminarians and seminary staff to get there but a good number of us did. Those who went not only helped out as marshals for the event but, more importantly, helped to bear witness to the inherent value and dignity of every human life to a world which is in so many ways indifferent to gross injustices.

The event has grown each and every year…

This year the theme of the day was ‘every life deserves love.’ This expression truly summarizes the entire celebration. March for Life is a witness of love for the unborn children who have no voice of their own. It is a witness of love to their mothers who often find themselves in such difficult circumstances. It is a witness of love even to the protesters who had come out to exercise their democratic right to make as much noise as possible in order to let us know they didn’t approve of our message. Our message of love was not just a message but it was truly a reality. Although we faced abuse and aggression we smiled back, sang songs and continued to have fun all the way.

Although we faced abuse and aggression we smiled back, sang songs and continued to have fun all the way.

Now more than ever it has become impossible to ignore the need to witness to the truth that ‘every life deserves love’ right from the first moment of conception until the last moment of natural death. Those who witness to love in a practical way outside abortion centers are increasingly being threatened with so-called ‘buffer-zones.’ At the same time our nation is itself moving at increasing spread away from a culture of life: that is to say, the notion that all people are endowed with inherent worth, dignity and natures. The most obvious examples of this can be seen in the shocking number of abortions that take place and in the way we are moving constantly closer to having legalized euthanasia. Less obvious example can be seen in the ongoing ‘gender’ revolution and even in the hedonistic approach to living life which has become so prevalent. Our message is desperately needed. Ultimately when we bear witness to life, we are bearing witness to Christ; Christ who will one day ask us where we were as the least of his brothers were faced with injustice.

This year one of the principle speakers at the March for Life was Rachel McKenzie. Rachel spoke about her own experience of having two abortions and how the Lord healed her from them. She shared with the crowd how she now works to help women who carry the scars of abortions through Rachel’s Vineyard ministry. Rachel will be coming to Oscott College to deliver a public talk on June 14th entitled: “The Prodigal Daughter: One woman’s journey from abuse, abortion and despair back into the father’s arms.”

There are two main reason why you cannot miss this talk:

1.You will not fail to leave inspired and thanking God for the way he is still working powerfully in the lives of his daughters and sons.

2.You can help to evangelise you friends and family simply by inviting them to come and hear. There couldn’t be an easier way to spread the Good News of Jesus Christ!