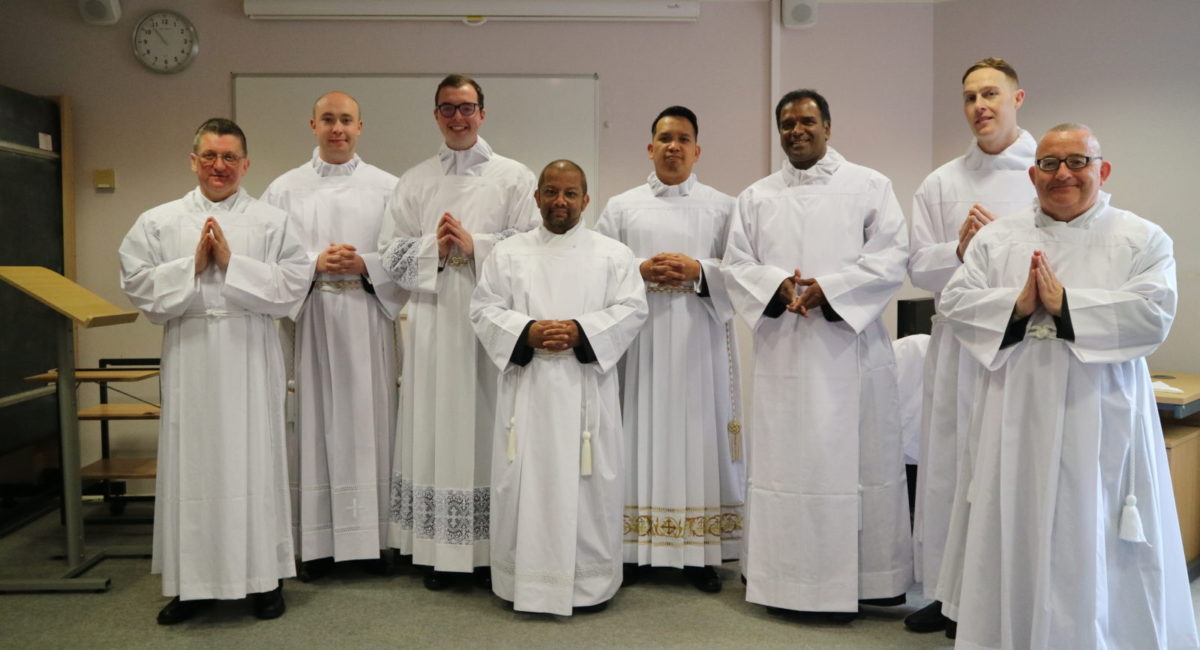 Today was many things. It was a beautiful, clear and sunny day. It was the last day of the college term. But more importantly than anything else however, today was the day when 8 Oscott seminarians got ordained to the sacred diaconate.

After five years of preparation the Rector of the seminary, Fr David Oakley, formally declared them to be worthy to the Archbishop of Birmingham. Having being found worthy they each committed to live a celibate life, to pray the divine office and to be respectful and obedient to their bishops. Following those commitment the 8 men each lay prostrate on the floor while the rest of the congregation knelt and implored the intercession of the saints for them. It was at this point that the seminarians actually received ordination through the laying on of hands by the Archbishop; part of the Church’s tradition since Biblical times. The bishop then prayed for them, presented them with a book of the Gospels (whose heralds they now are), invested them with their diaconal dalmatics and finally gave each of them the ‘kiss of peace’.

The sunshine helped to make the day, and there was no shortage of seminarians who were excited to be able to leave Oscott to start their long summer holidays but nothing compared with seeing brother seminarians reach the point of ordination. It was wonderful in and of itself to see them so happy and fulfilled as they reached this incredibly important milestone. However, it was also special because, as every diaconal ordination does, it provided every seminarian with a timely reminded of their own vocational destiny.

Over the last week the college community has been praying for these men and for their future ministries as deacons and then as priests. Today we are thanking God. As we go forward, we hope we can count on your continued prayers for them and for all of the seminary community as they journey towards the priesthood. May the Lord make them and all seminarians holy and may he increase the number of those who are willing to accept the call to follow him in this way!

If you enjoyed these photos, have you considered following Oscott College on Facebook for more regular photographic updates? We are also on Twitter and Instagram too.